Dave Ballinger reports on the changes that are taking place on Canada’s historic canals.

Parks Canada enjoyed a well deserved reputation in the world as an excellent operator, manager and guardian of Canada’s historic canals. However that is about to change. As part of the incumbent government’s deficit cutting program, Parks Canada seems to have an agenda when it comes to the canals under its responsibility. In the last few days many staff have been told who is surplus to the organization. Many of the positions identified are positions that one would consider as important or key to fulfilling the mandate, including water control and resource protection, to name just a couple.

It is understood that there will be one Superintendent for the two canals in Ontario who will be located in Peterborough. There appears to be joining of various functions and they will be located on either the Trent-Severn Waterway or on the Rideau. The question becomes very clearly: is this doable and if not, then what? 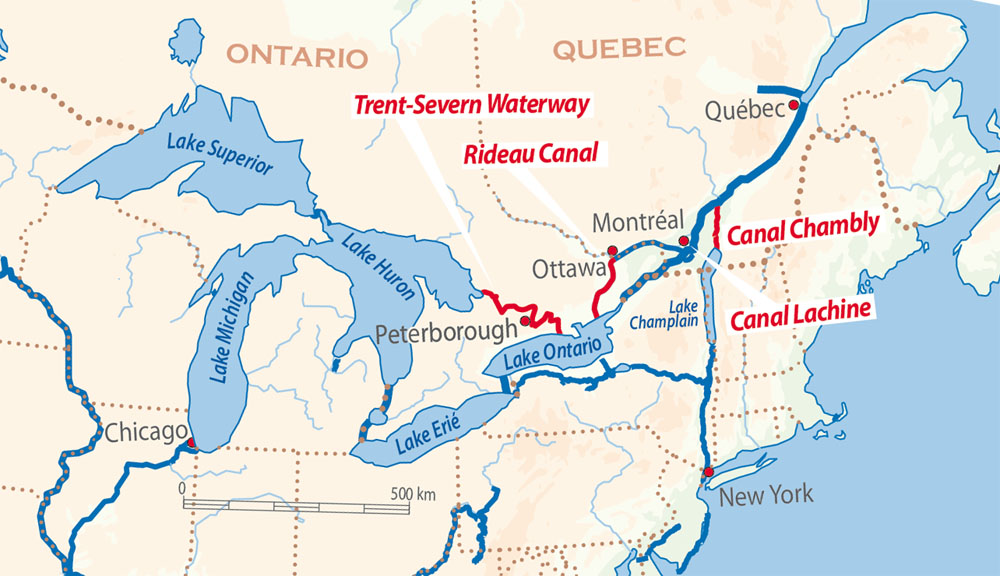 The main historic canals managed by Parks Canada in Ontario and Quebec (from Euromapping study for IWAC, UK)

As the information becomes available in ‘dribs and drabs’ it is difficult to get a good understanding on what the canals will look like into the future and what their roles and responsibilities will be with what is emerging as a new organization.

Parks Canada in the past has been relatively transparent when it has had to make changes. It was a model for doing public and employee consultation. However that is not the case this time. Severe changes to carrying out the mandate are being proposed and implemented, along with major changes to the organizational structure and way of operating including the announcement of the coming reduction in level of service. All of this has been done without any or minimum input. There have been limited public  announcements from Parks Canada. The only announcement was by a Vice President through the media that there would be no consultation. This is certainly a new approach for this organization, which was a model in providing information and consulting in the past no matter how bad the news.

So what’s next? We know that at the end of August the lock operating and maintenance staff will be told about their jobs. Also we will find out what the level of service will be. So this sad saga is not over yet and as these changes are implemented one has to wonder and be concerned if any of these major organizational changes will also have any implications for  things such as the World Heritage designation for the Rideau Canal in the longer term.