IWI brings together people and organisations who support the conservation, use, development and proper management of inland waterways worldwide. It aims to raise public awareness of the benefits of using waterways for a wide range of activities, from inland water transport to cruising, towpath walking and other recreational uses, as well as appreciating their architectural and landscape values as heritage. It also promotes restoration, where appropriate, of waterways which have become derelict.
Its membership includes leading navigation authorities, as well as voluntary bodies, museums and commercial companies. Individual members include both users and experts in the various disciplines.
All have a keen interest in both the history and the modern significance of inland waterways for commercial carrying and recreational use. Today the membership covers 22 countries from around the world. 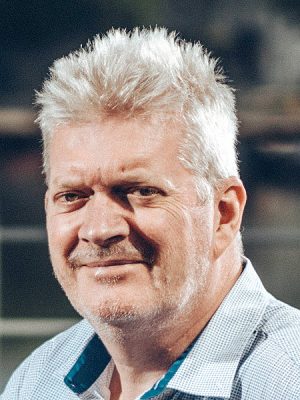 Rudy Van der Ween, promoter of water tourism in the City of Ghent, was elected the president of Inland Waterways International at its AGM on October 9, 2020. Rudy was born on 21 September 1960 in Ghent, Belgium, and is proud to still live there. He has built an impressive network of links with Flemish, Belgian, European and international projects and organisations. Rudy represents the ‘Flemish cities of art’ in the core team ‘Overlegplatform waterrecreatie, -sport en -toerisme’​ and is a member of the sub-teams ‘Inland Waterways’​ and ‘Water recreation’​ (Flemish authorities). He is secretary of NautiV, the Association of Flemish Nautical Companies, a council member of the Flemish Federation of Passenger Transport, president of the Flemish Committee of Sailing Heritage and member of NIWE (Network for Inland Waterways in Europe), PIANC (Belgium member), the High Council for self-employed persons and SMEs and Water Heritage Flanders. He is project leader for Ghent in the Interreg-project ‘Golden Lys’ and project member of Escaut/Schelde2050, whilst being a former project leader for Interreg 2 Seas ‘Yacht Valley’​ – Masterplan Snepkaai marina, Interreg II ‘sustainable canal restoration’​, Interreg IV ‘the river Lys, from source to mouth​’ and ‘Detour’: Compact Cities and Tourism – Developing Tourism in Urban Europe. Rudy is the City of Ghent’s representative in the regional Tourism Boards ‘Toerisme Leiestreek’ & ‘Toerisme Scheldeland’ and the Belgian representative and delegate in AEMA (European Association of Municipalities with Marina/Yachting Harbour) (association on hold) as well as founding board member of Gandavum (association promoting the cultural heritage along the waterways in Ghent and in the province of East-Flanders – association on hold). Rudy organised the hugely successful 2015 WCC in Ghent, together with NautiV.

IWI’s recently expanded Alternative Fuels Committee aims to promote methods to accelerate the transition of personal and commercial water craft used on inland waterway toward clean and sustainable propulsion systems. Its audience is the boating public as well as commercial interests, corporations and legislative agencies. 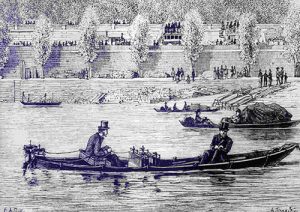 Its goal is to provide information on the latest technologies and best practices to these audiences so that they can make the best informed decisions about how to reduce carbon emissions from marine propulsion. The Committee is chaired by solar-electric boat owner and expert Hartmut Ginnow-Merkert. See Alt Fuels page

Pioneering electric boat on the Seine in 1881 (from Kevin Desmond’s book Electric Boats and Ships: a History)

The Inland Waterways Pavilion assembled by IWI for members at Boot Düsseldorf attracted great interest. See a film made by the Serbian Nautical TV channel Nautika TV. The focus is on Danube Propeller stand, but the video gives an excellent overview of the whole pavilion. Danube Propeller & IWI 2019 at boot Düsseldorf – NAUTIKA TV Show Presentation 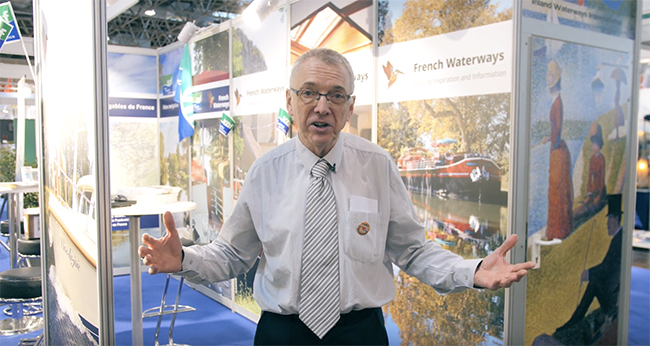 IWI is a member go the ‘Think Climate’ coalition under the auspices of PIANC (the The World Association for Waterborne Transport Infrastructure), working on a far-reaching initiative Navigating a Changing Climate. The coalition members believe that it is essential to adapt inland and maritime navigation infrastructure; uncertainty can no longer be used as an excuse for inaction. The evidence is unequivocal. Climate change is happening. Adaptation of inland and maritime navigation infrastructure is vital, and the time to act is now. See the coalition web site here. A global declaration on climate change adaptation for transport was presented at COP22 in Marakech, Morocco, on November 17th, 2016. The coalition also includes the International Association of Ports and Harbors (IAPH), the International Harbour Masters’ Association (IHMA), the International Maritime Pilots’ Association (IMPA), the International Bulk Terminals Association (IBTA), the European Dredging Association (EuDA), the Smart Freight Centre (SFC), the European Sea Ports Organisation (ESPO) and the Institute of Marine Engineering, Science & Technology (IMarEST).

Members receive regular news of campaigns and developments in all areas through the magazine World Wide Waterways and newsletter IWI News.
Information is also regularly posted on our blog and Facebook page Inland Waterways International – IWI 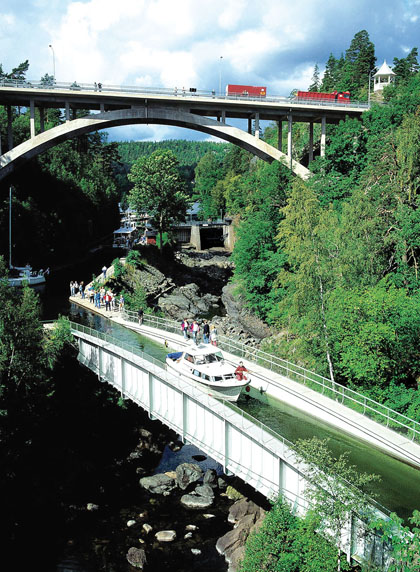 Håverud Aqueduct on the Dalsland Canal in Sweden, which celebrated its 150th anniversary on 31st August 2018