IWI has established itself as a ‘place to be’ at the world’s biggest boat show, BOOT Düsseldorf, thanks to the generous conditions offered by Messe Düsseldorf. The prototype of our dedicated Inland Waterways Pavilion was set up and staffed by Council members from January 19-28, 2018, with results that augur well for even greater impact at next year’s event, when we expect to have up to 10 co-hosting organisations.
The concept, proposed by BOOT at a meeting with our representatives during the 2017 event, is designed to allow inland waterways stakeholders to represent their mission, their region, their services and products in a recognisable environment and under the trusted umbrella and corporate identity of IWI.
Two corporate members joined us at the 2018 show, D.V. Marec (the Maasland marinas in Belgium) and De Vlaamse Waterweg (the new single waterway authority for all Flemish waterways), each with their own space, while Scottish Canals delegated Crinan Canal manager Donna Milan to join us on the stand for the last few days. The European waterways map stretched across the whole 6m width of the stand, part of it forming a walk-through curtain between IWI’s section and the two Belgian exhibitors. This was an eye-catching feature and caused many visitors to stop and plan future cruises, or reminisce on past voyages. 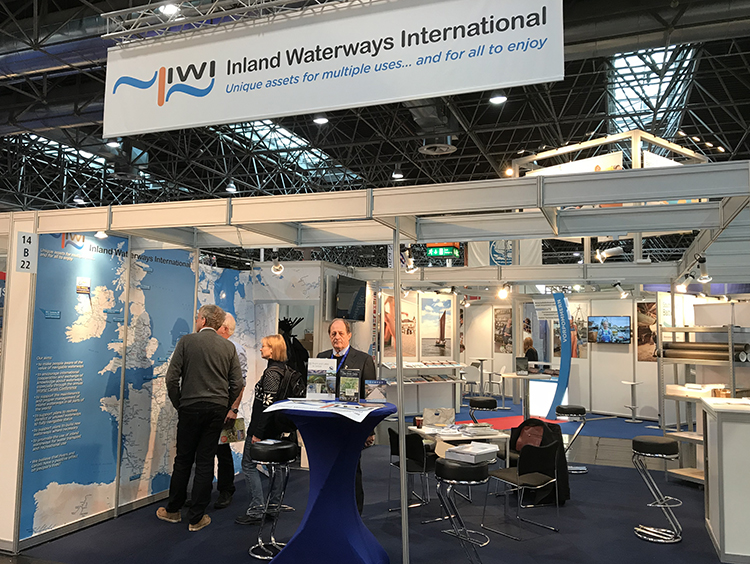 IWI’s stand in Düsseldorf; co-exhibitors D.V. Marec and De Vlaamse Waterway are on the other side the map curtain

We had an estimated 700 visits during the show. Just over a half were German, while the foreign visitors were mainly from northern Europe including the UK, with around 7% from France. Among the ‘VIPs’ visiting our stand were Geert Dijks, Managing Director of HISWA; Jürgen Tracht, Managing Director of the German Marine Federation, and John Kwong, who represents China on PIANC’s Recreation Commission, who told us about his project to bring a replica 12th century junk to Sail Amsterdam in 2020.
The visits and the time spent in relaxed conditions on our spacious stand led to recruitment of new corporate members from six countries, and new individual members from Germany. More are in the pipleine, after initial discussions. Vice-president and stand manager Paul Ayres was particularly active in selling memberships.
IWI’s ambition is to make a difference for our corporate members, by creating a unique platform for international presentation, in a way that a single organisation could not achieve, because of logistical and communication difficulties, and the costs involved. Planning has already begun for next year’s fully-fledged Inland Waterways Pavilion, covering between 120 and 140 m2 depending on the number of co-exhibitors, who need to sign up by June 30, 2018 in order to secure the space, which is already oversubscribed in Hall 14.Also tested in January was the concept of introducing at BOOT Düsseldorf the upcoming World Canals Conference (WCC). Katrina McGirr, communications manager of Waterways Ireland, thus attended the show on Tuesday January 22 and gave a press conference on the event, supported by IWI’s president and special projects manager, and backed up by an inspiring video. The video, one of many which we showed on the stand, highlighted Athlone on the river Shannon, at the heart of Ireland, as the ideal conference base and perfect location from which to explore the beauty of the country’s inland waterways. 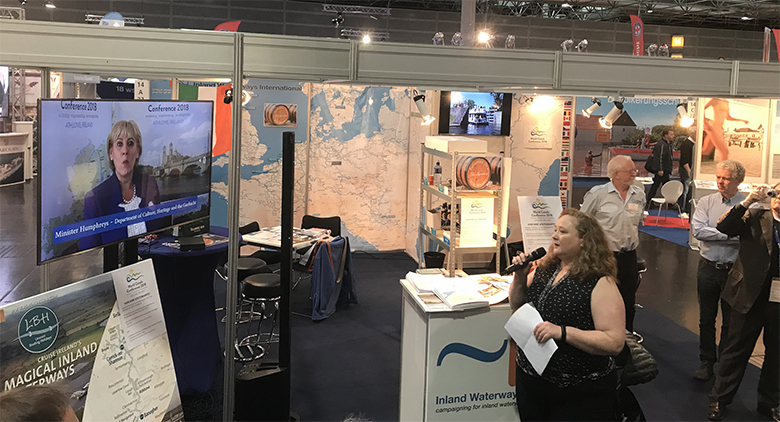 A draw was held during the Waterways Ireland-sponsored event, and first prize, a week’s hire boat holiday offered by Carrickcraft, went to the Polish nautical press photographer Arek Rejs, while the second prize, two nights accommodation in Athlone for the WCC, was won by Paul Ayres.
We are very grateful to Council member Peter Linssen and his colleagues at Linssen Yachts for their hard work both planning and setting up the stand in appalling conditions, bitter cold and snowbound roads and railways two days before opening! Also to Paul Ayres, Krsta Paskovic, Mike and Rosaleen Miller and  Donna Mallan for their valuable presence on the stand.