Radomir  Ječinac  reports from Belgrade, Serbia, on the ‘regatta’ (flotilla cruise) organised on the canals and waterways of Serbia in June/July 2012.

Remember IWI’s annual World Canals Conference held in Serbia, in the beautiful city of Novi Sad on the Danube, in 2009? The host, Vode Vojvodine (Vojvodina waters) is an all-important institution in our country, which was founded to manage the network of artificial canals in this relatively flat province in northern Serbia. When the Irish boat Aquarelle entered Serbia in July of that year (encouraged by WCC co-host Danube Propeller), and Mike and Rosaleen Miller asked for permission to cruise through the Vojvodina canals, this was en eye-opener for Vode Vojvodine, who were encouraged to give official status to what was previously an informal gathering of domestic boaters each year. 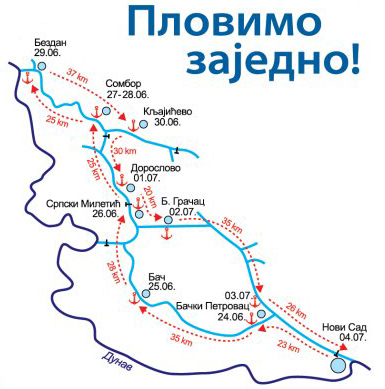 Itinerary for the 11-day cruise, including some of the lesser-used canals

The event has since gone from strength to strength, and I joined this year’s regatta, with a full programme to delight Serb boaters for 11 days (see map, left), from June 24 to July 4. This was the 4th to be organized by VV: 10 stages in 11 days over 300km of canals between Novi Sad and Bezdan. Ah, Bezdan! We heave a sigh at every mention of the name, because the entrance lock here from the Danube is still closed. We still had our moneys’ worth, though, since these 300 km represent half of the Vojvoodina network.

Warned that the number of boats had to be limited, the skippers of some 90 motor cruisers and dayboats of all possible types and sizes, 250 people in all, sent their booking forms as soon as the event was announced! Mothers and fathers of families, to say nothing of the Dog‘, as Jerome K. Jerome remarked. There were couples with children who had barely started walking. 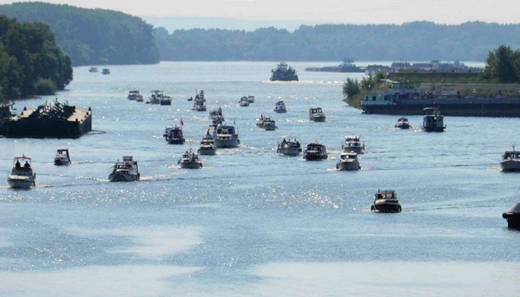 Nearly 90 boats enter the main canal at Novi Sad, approaching the first lock on the cruise

Nearly half the  boats came from afar, boat harbours on the Danube or Tisa, for example: from Belgrade, Zemun, Pancevo, Smederevo, Novi Bečej on the Tisa, not afraid of all the extra kilometres and the strong current of the Danube to reach the starting point at Novi Sad. One sizeable boat came from Vukovar, Croatia, thus giving the event its international character.

The regatta’s Commodore was Mirjana Živković, hydrotechnical engineer at VV, petite, a bundle of energy with bright black eyes, tireless and ubiquitous, participating in the regatta herself with her boat and family, ‘to say nothing of the dog’ in this case also! She had to deal with a complex organization: locks, free passage for participating vessels, technical and first aid teams, municipal receptions for participants, refreshments and local cuisine, al fresco meals along the canals, folklore programs, minimum supplies by itinerant merchants, etc.). For us Serbs, with a litre of diesel costing €1.50, and average monthly wages between 300 and 400 euros, the benefits of organised navigation are obvious.

On pages 35 and 36 of the European Waterways Map and Directory (2008 edition) we read of the attraction of this annual regatta for Serbian boaters. IWI can therefore congratulate itself for having contributed in a way to what is now the biggest navigation event in Serbia.

The author beside his boat at a quiet mooring in Bezdan