The British Government placed 2000 miles of canals and rivers in trust for the nation, as the new charity, the Canal & River Trust, was launched on July 12. The trust takes over responsibility for the canals of England and Wales from British Waterways, 50 years after the British Waterways Board was founded in 1962.

The change in governance had been planned for several years, as reported in IWI’s publications. The logo neatly adapts the traditional BW humped-back bridge, which had been the public corporation’s logo since 1981. The swan represents the environmental quality and values of the waterways more dynamically and actively than the reeds.

The focus in launching the charity is on the 10 million ‘users and lovers of the canals’ who will have an opportunity to play a greater role in securing their future, through the Trust. The Trust’s first patron is HRH The Prince of Wales, who recorded a welcome speech on June 12. Poet Ian McMillan also wrote an evocative poem for the occasion, ‘Canal Life‘, suggesting that canals hang in that place between memories and water.

Half the population of the UK lives within five miles of a Canal & River Trust waterway. The system has 1569 locks.

The sober statement on the British Waterways web page says that the corporation ceased to exist in England and Wales on July 2. In Scotland British Waterways continues to exist as a legal entity caring for the canals under the trading name ‘Scottish Canals‘.

The Trust has also taken over BW’s information portal waterscape.com.

We wish the Canal & River Trust every success! 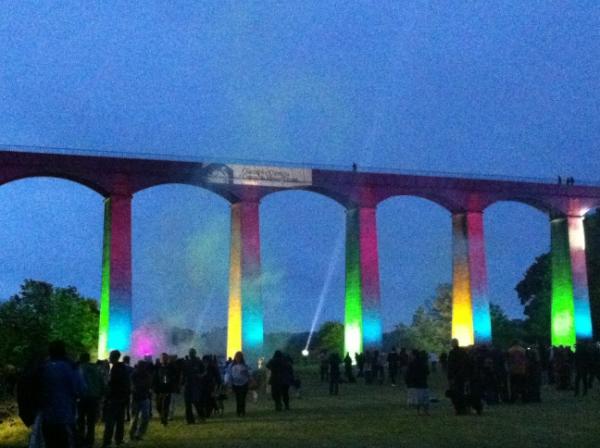 Pontcysyllte Aqueduct, a UNESCO World Heritage site, at a son et lumière celebration on July 12. The event celebrated creation of the CRT and the 3rd anniversary of listing of the site (shared by Rachel Allen)