Former IWI president Tom Grasso has been campaigning for eight years to bring back to life the enlarged (1842) Erie Canal in downtown Rochester, NY. The World Canals Conference was held here for the second time in September 2010. ‘The event took us a dramatic and profound step forward in terms of raising awareness of the Erie Canal’s potential today, its robustly storied past and the iconic 1842 aqueduct in downtown, for both the general public and the international assembly of delegates.’

‘The evening reception in the aqueduct, the “Dinner in the Ditch”, made a lasting impact. It still echoes in the community. Thanks to our sponsors, partners, and hard work of the planning committee the WCC was a world-class act of the highest caliber in program, content, and social events. Today we should build on the conference’s success and keep the momentum. 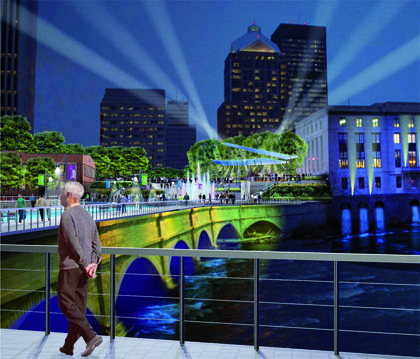 ‘We must not let the lessons learned and the ideas discussed wither and die. Now is the time to consider our City’s future while building upon the past. We need to use this opportunity to leverage other urban waterway development initiatives from around the world, not just our old Erie Canal and aqueduct.

‘Consider our history: America’s first inland boom in the early years was fueled by the construction of the Erie Canal. If not for the canal, Rochester would not be what it is today. The mid-1800s expansion of the second Erie Canal, the Enlarged Erie, through the City created the 1842 aqueduct (Broad Street Bridge) that still stands today, the only intact old Erie Canal urban aqueduct on the system.

‘By the early 20th century Rochester had outgrown the canal and when the fourth Erie Canal was completed in 1918 it took an end run around the city and the old canal bed was converted into a subway by roofing over the canal trench with Broad Street. The subway operated from c.1925 to 1956 when it too faded into oblivion.

‘The projected rewatering is all about turning historical features into engines of economic revitalization. Cities around the world have restored or are planning to restore their historic waterways: in Korea, Japan, China, France, Belgium, the Netherlands, England, Denmark,… North America is no exception as waterway projects, bristling with successful economic revitalization, have been completed in a number of cities: in Montreal, Oklahoma City, Providence, and San Antonio. The fact that water restoration projects have been successful in so many different countries proves that it is a cross-cultural phenomenon and a primal basic instinct uniting all of humanity: attraction to water.

‘Rochester decision-makers are unable to commit to major public investments in the current climate. Yet developers know that waterfront property is more valuable; there are no substitutes for waterways in urban settings as engines of economic revitalization and regeneration. Imagine what it would be like to live, walk or eat dinner right next to the water on Broad Street, as you can do in Pittsford or Fairport. A waterway with boats and a wide promenade is a magnet for housing, shops and restaurants, bringing new jobs.

‘Canal Development is a proven money-maker; the British have made significant investments in canals to revitalize urban areas. In his book Britain’s Restored Canals, Roger Squires points to restoration as a catalyst for economic growth : over $12 billion equivalent has been derived from canal redevelopment.

‘To keep this project alive, we must keep up the pressure, but it is a constant struggle. An overwhelming majority of the delegates at the 2010 conference urged us to continue bringing the old Erie Canal to life again through downtown Rochester. We have received messages of support from the Chairman of British Waterways, and Jim Stirling, engineer, who led the BW team that built that the Falkirk Wheel in Scotland and restored the two canals that the Wheel united. He stated in the September 24th 2010 issue of the Democrat & Chronicle that a canal brought back to life is a like a magnet that draws people and businesses such as pubs, marinas, as well as light commercial developments and residences.

‘This economic model can work in a city like Rochester! Magical canal and waterway restorations have converted a no-go industrial canal wasteland in Oklahoma City, virtually nothing but a streetscape, into something wonderful and really special. We in Rochester also have the opportunity to accomplish something truly exceptional but with the added value of brand-name recognition. Restoration of the iconic old Erie Canal will have a robust economic impact on the downtown Historic Old Erie Canal District corridor and the city as a whole. Canal history has handed us a gift : we have, cradled in our hands, an enormous opportunity to achieve something truly special. Who among us can envisage consciously taking something so special and, in direct contrast to Oklahoma City, transforming it into absolutely nothing?

‘Now we have set up the World Canals Conference 2020 Planning Committee. We know that we will be in competition with other host countries and cities. But our ambition is to host the event in the year 2020 to inaugurate either the construction of or the grand opening of a fully re-watered old Erie Canal into downtown Rochester. The Committee plans to consign to history a century of wanton neglect, and to celebrate in 2020 the complete revival of Erie’s water downtown, as an engine of economic revitalization.’