Following the successful World Canals Conference in Yangzhou, Jiangsu, China, on September 25-27, the organisers plan to publish a collection of photos to show Yangzhou in the eyes of foreign delegates and friends. It is hoped this will bring a new perspective on the historic Grand Canal through the city, the new canal and all their connections, as well as the related sites, heritage and cultural activities experienced during the three-day event. All participants are therefore cordially invited to send photos of the city and the Grand Canal taken during their stay in Yangzhou. Contact the compiler via the conference web site

A highlight of the event was the electronic signing of the Grand Canal Cities’ Agreement on the Joint Protection of the Heritage of Grand Canal. 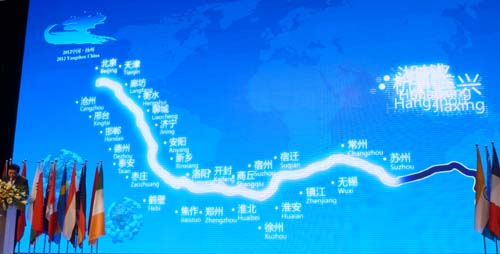 Grand Canal Cities sign the charter for submission of the draft nomination document for UNESCO World Heritage listing, on 25 September 2012