The WCC in Athlone, Ireland – a member’s experience

Irish eyes were justifiably smiling following the 31st World Canals Conference (WCC) – the second to be hosted by Ireland. The first was held jointly in Dublin and Belfast in 2001 and this year’s conference moved to central Ireland, to the town of Athlone, appropriately lying astride the River Shannon, which is the largest and longest river in the British Isles. The venue was the new conference centre at the riverside Radisson Blu Hotel. Assessing the conference results, assistant chief organiser Katrina McGirr, of Waterways Ireland, excitedly said: “We have 316 delegates from 12 countries, including Australia, China, Canada and the United States, and 48 speakers representing most of them!” 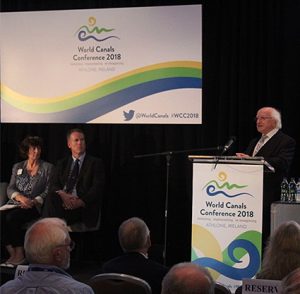 The three-day conference comprised formal sessions in the conference halls on the first and last days, with the middle day billed as a choice of ‘technical and scenic tours’. There were also pre- and post-conference tours, each of a few days, visiting a number of waterway sites across Ireland, including Northern Ireland. Here the delegates were able to inspect the work-in-progress restoration of the Lagan Canal by the Lagan Navigation Trust. On hand to show them round was Lady Daphne Trimble, its vice-chair, who is married to Lord David Trimble, who was awarded the Nobel Peace Prize in 1998 for his defining role in the Northern Ireland peace process. As Dawn Livingstone, head of Waterways Ireland, emphasised in her opening address: “Waterways Ireland is a now a truly cross-border organisation, managing all the waterways of the island of Ireland.” This, she hoped, would survive post-Brexit, in whatever form it took.

The theme of the conference was ‘Restoring, Regenerating, Re-imagining’ – each of which was dealt with by the three keynote opening speakers. They included Mike Palmer, for some years chairman of the IWA Waterways Recovery Group (WRG) who, under the theme of ‘restoring’, took the conference through a review of what WRG had achieved since its foundation in 1970 by Graham Palmer to its activities today, which still attract some 500 volunteers annually to work camps across England and Wales. Popular tour The theme of ‘re-imagining’ focused on how the waterways could attract greater numbers of users to justify the heavy costs to governments for their role in maintaining them – against the growing demands of healthcare, education, pensions and the like. The word ‘well-being’– now high in the vocabulary of the CRT, and used to justify the cost of its new, controversial and little-loved logo – was repeated by many delegates. As one American delegate pointed out: “Keeping people healthy on the waterways costs a fraction of having them in hospital!”

But all agreed that it was boaters boating that made the waterways special in the first place. For most of the formal sessions delegates had to make painful choices as to what to attend, as there were three ‘breakout sessions’ running simultaneously – all well worth attending. They included two addressed by representatives of the CRT, one from Scottish Waterways, and again for the IWA, the perennial Roger Squires, a vice-president and a member since the early 1970s. Roger has addressed at least 20 WCC conferences over the years. 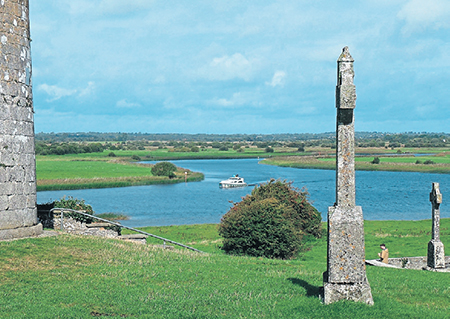 The most popular trip was one which included a visit to a World Heritage Site, the ancient ruined monastery of Clonmacnoise.

The most popular tour was a boat trip starting across the river from the hotel, from the quay at the foot of the medieval Athlone Castle, going down the Shannon for about 10 miles to the World Heritage Site of the ancient ruined monastery of Clonmacnoise. It was then on to the grand canal town of Tullamore and a visit to its world-famous Tullamore Whiskey distillery. This was followed by a visit to the old canal harbour and adjacent to it the canal maintenance workshop, where lock gates are made for the Irish waterways. The tour concluded with a visit to Bolands Lock – just east of Tullamore – to see the recently rescued and restored lock house, which had originally been built to resemble a miniature version of a tower-chateau on the French River Loire.

The project had been lovingly carried out by a Dublin accountant and he had completed the task by furnishing it as it might have been when it was completed around 1800. He showed the delegates round with a passion and enthusiasm that only the Irish possess. Powerful speech As a huge compliment to the WCC, the final address was by the President of Ireland, Michael D Higgins, who delivered a powerful and moving speech. The President knew the Irish waterways well, as they had been his responsibility between 1993 and 1997 when he was Minister for Arts, Culture and the Gaeltacht in Dick Spring’s Labour government. 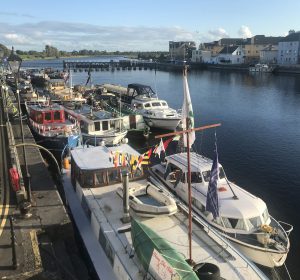 Heritage boats assembled for the World Canals Conference on the Shannon quay in Athlone.

In those years Higgins had made huge improvements to the waterways, seeing them as a catalyst for tourism and rural regeneration. This included twinning the Irish Grand Canal with the English Grand Union Canal in 1995. The conference concluded with a handover presentation to the head of the large Chinese delegation, Minyang Zhu, by Dawn Livingstone of Waterways Ireland and John Dolan, chair of the Inland Waterways Association of Ireland. The Chinese will host the 2019 World Canal Conference at two cities on their Grand Canal – the oldest canal in the world – at Yangzhou and Wuxi. Plans are already well under way for the 2020 conference to be held in Leipzig, Germany, and for the 2021 conference at Hagerstown, Maryland, on the Chesapeake and Ohio Canal near Washington.