The new French government plans to ‘pause’ the long-awaited Seine-Nord Europe Canal. Immediately after the newly-elected president Emmanuel Macron formed his Government, there were concerns for the project, as the Prime Minister Edouard Philippe was known to be less than luke-warm to the project (as mayor of Le Havre, fearing a loss of traffic).

After that there was a flurry of reassuring news in May and June, after intense lobbying by the project’s leading protagonists. An important signal for the project was the nomination of VNF’s managing director since 2010, Marc Papinutti, as private secretary (directeur du cabinet) to the new Minister of Transport Elisabeth Borne, who will answer to Minister of State for Ecological and Social Transition Nicolas Hulot.

Marc Papinutti had just been appointed one of three executive directors of the new public company set up to build the 107-km long canal. Another key player, Stéphane Demilly, MP for Albert (near Péronne, half way along the route) was appointed president of a parliamentary group in the new Assemblée Nationale. The other two members of the directoire are VNF’s Jérôme Dezobry and Cyril Forget, previously private secretary (directeur de cabinet) of the outgoing Transport Minister Alain Vidalies.

The supervisory board (conseil de surveillance) was to be chaired by the MP Rémi Pauvros, key player in the ‘reconfiguration’ after 2012, while the vice-president was to be Gérald Darmanin. The former has lost his seat as MP in the June General Election, while the second has been made Minister for Public Action and Accounts. The supervisory board therefore awaits new appointments.

All involved in the project are in a state of shock at this ‘pause’ imposed on the project by the new minister of transport, who has  the prime culprit in terms of excessive investment spending is clearly the additional (and less profitable) high-speed railway lines, and not the canal, which will mobilise no more than € 200 million of State funds up to 2019.

The canal is expected to create 130 000 jobs during construction, and about 50 000 permanent jobs, many of them concentrated in the industrial port platforms developed along the route (see layout of one of the platforms below).

A detailed introduction to the canal is available in Inland Waterways of France, by David Edwards-May, and can be read on line here. The same site offers the possibility of downloading the section on this waterway (or any of 80 waterways throughout France) 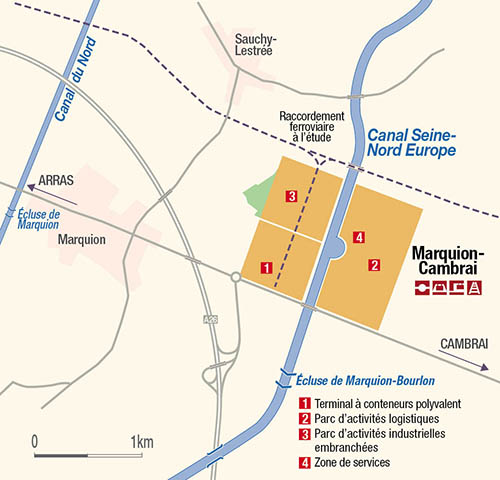