French president François Hollande supports inland water transport as a carrier of freight to and from the country’s struggling seaports. While still a candidate in the second round of the presidential election, he signed on May 2nd a letter to two waterway organisations indicating a firm intention to revive the Environmental Policy initiated and then abandoned by the previous government, to transfer more freight from road to rail and water. IWI‘s February Newsletter featured the letter from Jacques Romain, president of the Entente des Canaux du Centre France, to all 10 candidates for the presidential office. A similar initiative was taken by the French barge-owners through their representative body, the Chambre Nationale de la Batellerie Artisanale. 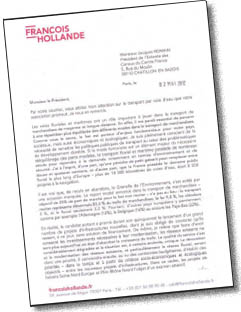 The letter, of which an English translation has been produced by DBA–The Barge Association (click on thumbnail, left), sets out the candidate’s objectives for transport and inland waterways, and underlines the importance of investment in infrastructure to ensure competitivity of intermodal solutions to and from the main seaports: Marseille, Le Havre and Dunkirk. The ports (and industry) are handicapped by the unsatisfactory waterway links to the hinterland, as a result of which, for example,  85% of freight movements to and from the port of Marseille are by road.
Water transport still only accounts for 2.2% of inland freight movements in France, compared with 12% in Germany, 16% in Belgium and 33% in the Netherlands. The policy statement refers to both the Seine-Nord Europe Canal and the Saône-Moselle.Saône-Rhine waterways, ‘to be the subject of careful study’, and to the principle of a pollution tax contributing to the funding of new investments. He stigmatises the previous government’s failure to implement the ‘Grenelle Round Table’ measures, aimed at increasing the share of rail and water to 25% of total freight movements.

The Entente (with its member DBA–The Barge Association) and the CNBA are to be congratulated for their initiative. Although the response is that of a candidate seeking votes, with all the caveats that implies, it is evidence of a position that is totally supportive of inland waterways. There will doubtless be occasions to remind President Hollande and his government of the candidate’s policy statement.