The Canal and River Trust (UK) has published the final results of the Interreg IV B programme conducted by six partners across Europe. See earlier post about a key visit made by the partners to the pilot sites in the UK. 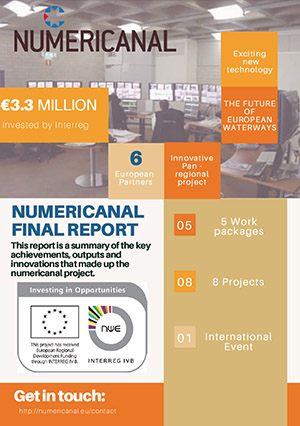 Cover of the Numericanal Report, 2016

The £3.3 million EU-funded project concluded that the future of our inland waterways is closely bound up with digital technology. The project, led by CRT, brought together six partners working in the field of ICT and waterways management.
VNF took part for its PoGo app, designed to provide location-based information as well as instant posts by the community of waterway users.
Waterrecreatie Nederland (formerly SRN) brought its safety programme Varen doe je samen (let’s sail together) and adapted it for wider application throughout Europe.
City of Eindhoven completed investment in their control centre on the Beatrix Canal, with a web/mobile app running user applications and implementing various automation systems and rules. Eisjden-Margraten, a municipality near Maastricht, similarly experimented with a safety app.
The sixth partner was the ‘technical integrator’, the Belgian-based CETIC.

During the study visit in 2015 by waterway managers from throughout Europe. CRT showed the cutting edge technology in action on the UK’s canals : remote operation of a bridge on the Gloucester & Sharpness Canal, and a new waterway control centre on the Grand Union Canal at Hatton. The technology here helps manage the Trust’s fleet of workboats and vehicles, issues work notices and schedules to staff and monitors incidents and emergencies over hundreds of kilometres of canals in the Midlands. Representatives from Scottish Canals and the pan-European boating group The Barge Association (DBA) were also present at this visit.

The conclusions are summarised in a leaflet available for download. Steve Higham, European funding manager at the Canal & River Trust, said: ‘This project has started the process of bridging the gap between the problems waterways face and the technology available, as well as the distance between our partners. Historically, waterways have been managed at the local level, and there have been few instances of technology being shared across borders. Numericanal challenged this, and has led to a real change in the mindset of waterway organisations along with innovative technological advances.