It is sad how ideas conceived with the best of intentions by local politicians sometimes go hopelessly wrong because their implementation is dictated by trends and political expediency.
Visiting Chanaz on May 6, I discovered this impressive addition to what is already a superb site, and one of my top 10 waterside villages in France. This is at the western end of the Canal de Savières which links the upper river Rhône to Lake Bourget.
You see this ‘lakeside village’ and think ‘the architects had fun there’. You see hundreds of people enjoying the site on a glorious May day. Then your attention is drawn to the fine pontoons complete with water and electricity points. And you wonder why none of the chalets has been rented, and why there are no boats in the harbour? 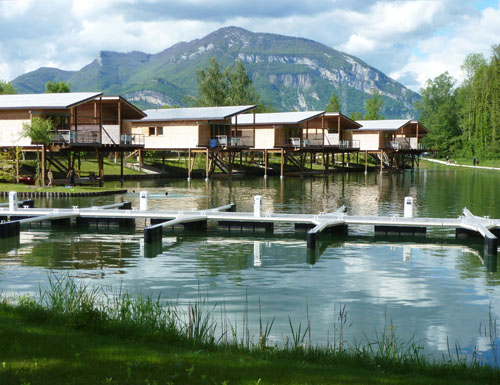 New harbour and pontoons, but no boats

Then comes the explanation… and the disappointment, at least on the second observation. Access to this idyllic harbour is open to electrically-powered boats only (as well as unpowered craft), as shown by the sign on the swing-bridge over the harbour entrance. 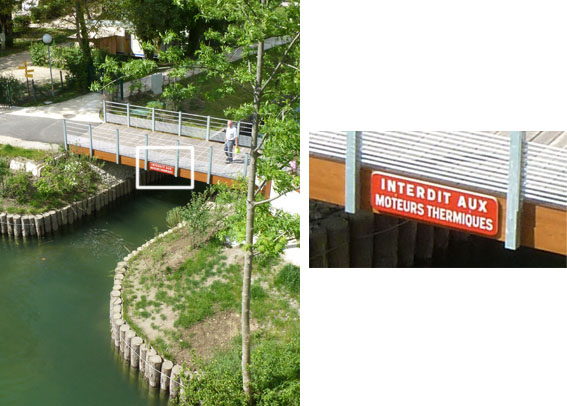 The only electric boats present in the region are open boats for hire by the hour, and would not be clients for such an installation. So it seems that the mayor and his council have either been misled by the designers of the project, or have given in to pressure from environmentalists or government departments.

By excluding nearly all powered craft, the harbour and its pontoons are rendered practically useless, and that part of the total investment of EUR 1.8 million will be sadly wasted, while the ‘regular’ moorings along the backwater of the Rhône at Chanaz are fully occupied with many boats on the waiting list.  European regulations on boat engine emissions and noise (through the technical requirements for inland waterway craft) are increasingly stringent, so excluding boats from this harbour is a misguided choice.